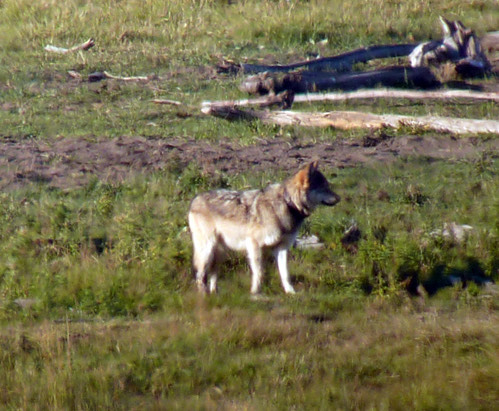 823Fg was born into Yellowstone's Mollie's pack in April 2011. She was one of seven surviving pups born to alphas 486Fg and 495Mb. On her mother's side, 823Fg has Nez Perce pack (reintroduced from British Columbia, Canada in 1996) and Sawtooth pup (born into wolf pack residing in northwestern Montana, orphaned when the parents were killed in a livestock control action, and released into Yellowstone in 1997) heritage. On her father's side, 823Fg's lineage traces back to the Rose Creek and Crystal Creek (reintroduced from Alberta, Canada in 1995 — note the Crystal Creek pack was renamed the Mollie's pack in honor of the late Mollie Beattie, the U.S. Fish & Wildlife Service Director who was so instrumental to the reintroduction). Her father was the largest wolf in the park until another wolf, 760Mg, took over the title that year. 832Fg was still a pup when she lost both parents: her father was killed during a pack hunt that August — he is believed to have been stepped on by a bison. Her mother disappeared shortly after the loss of her mate. Her older sister, 686Fg, then took over the pack after their mother disappeared.

823Fg was radio collared as a pup on Feb. 4, 2012. The Mollie's pack was lacking an alpha male and consisted mostly of yearlings and pups. Hunting was more difficult as they were lacking the larger animals whose experience and size help the pack to be successful. According to Doug Smith, “The exception to the thriving interior packs is the Mollie’s pack, which fell from 19 wolves in 2011 to 10 in 2012. The pack was one of the first to consistently feed on bison in the park’s interior. But by 2012 the pack’s age structure was not conducive to hunting bison — 13 of the 19 wolves were pups or yearlings and four of the remaining six were older females. Big, mature males are the most successful bison hunters.” As a result of the pack structure, the Mollie's spent a fair amount of time in the Northern Range — both looking for elk which would be easier prey than bison for the pack to take down and alpha female 686F was searching for a mate.

On Oct. 15, 2012, the Montana general rifle wolf hunting season began, which meant wolves crossing the northern boundary of Yellowstone National Park into Montana faced potential danger. By the time the Montana wolf hunting season ended on February 28, 2013, hunters killed 128 wolves and trappers killed 97 more. 823Fg was shot in the Montana hunt — at the end of her life she was just another notch in the ratcheting kill count. Lamar Canyon pack members 06 and 754Mb would similarly be taken from this world in 2012 by hunters in Wyoming. We honor 823Fg, who was just a yearling on Nov. 13, 2012 when she took her last breaths.

This story is possible with tremendous gratitude to:

‍Yellowstone Wolf Project for their longtime efforts with wolf reintroduction and restoration. The dedicated team members conduct year-round research and monitoring of Yellowstone wolves. The science and education impacts worldwide wolf conservation efforts. The 06 Legacy is very appreciative of the knowledge they share with the public in the Yellowstone Wolf Project Annual Reports.

The Yellowstone Wolf Family Tree documents the life stories and genealogy of every Yellowstone wolf in Ancestry.com. Thanks to the archivists, the rich history of the individuals and packs is available to the public now, and for generations to come. To join the tree, go to the web portal www.wolftales.info. Once there, select the Ancestry tab and scroll down to the Invitation section. Be sure to follow the instructions when submitting your guest request.

Note: For the wolves within the story above, the number depicts the the radio collar, F or M represents the gender, and b or g represents either a black or gray-colored coat. For example: 823Fg is a gray-colored female that was fitted with radio collar number 823.