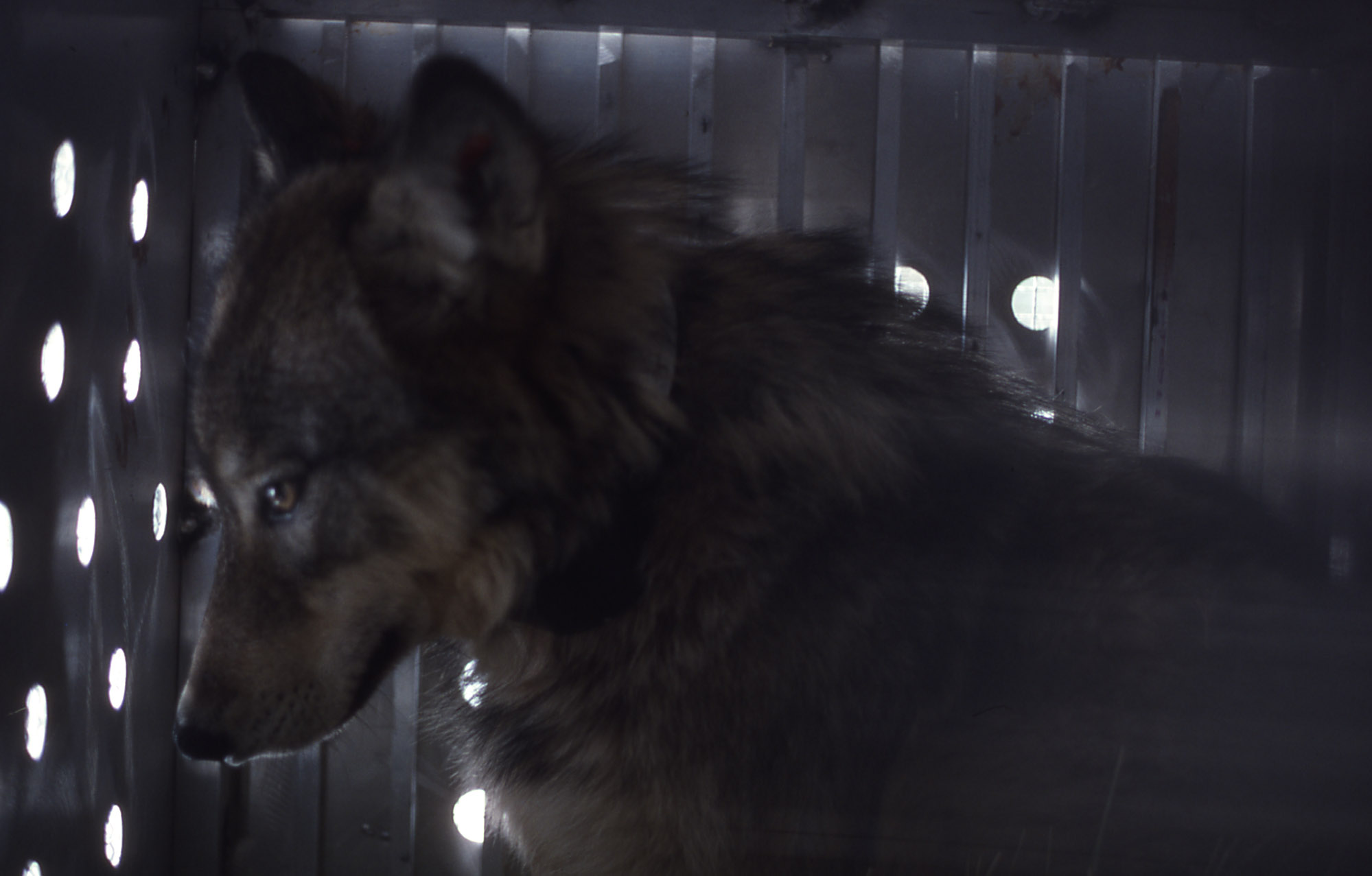 On January 11, 1995, a cargo plane in Hinton, Alberta was loaded with the first eight wolves going to Yellowstone National Park for the wolf reintroduction. The wolves readied for transport had been captured east of Jasper National Park. Their destination was America’s first national park, whose pristine wild lands had been missing wolves for almost 70 years.

The reintroduction was over 20 years in the making. While biologists recognized the critical role wolves play in maintaining the health and balance of an ecosystem, many opponents feared the return of the wolf. During the flight to the U.S., the Farm Bureau filed a last minute appeal to halt the reintroduction. To give the court time to review the lawsuit, a judge issued a 48-hour delay in the release of wolves from their individual shipping kennels.

When the wolves reached Great Falls, Montana, they were transferred from the plane and trucked to the North Entrance in Gardiner, Montana. At 8:35 am on January 12, 1995, the horse trailer carrying the precious eight wolves passed through the Roosevelt Arch and entered Yellowstone National Park.

It was a moment in history that wolf advocates will never forget!

The trailer drove the wolves to Lamar Valley in the northeastern corner of the park. At the trailhead, the kennels were transferred to a mule-drawn sled and taken to one of the acre-sized fenced-in acclimation pens constructed to hold a family of wolves.

An acclimation pen on Crystal Bench would be the temporary home to six of the eight wolves. They were members of the same family unit, two adults and four pups captured together near Alberta’s Petite Lake. The remaining two kennels held a mother and daughter from the Canadian McLeod pack. They were taken to an acclimation pen constructed along Rose Creek, north of the Lamar Buffalo Ranch. Both wolves were absolutely beautiful. The mother wore radio collar number 9. Her stunning black coat was actually a gorgeous mix of colors. Her daughter was still a pup. She wore radio collar 7 and was nicknamed Rosie for the lovely reddish hues in her gray coat.

When the shipping kennels were set down the acclimation pens, the wolves could not be released. They would remain confined until the judge ruled on the appeal. Although the kennels were specially designed to house the wolves, they were only meant for for short-term travel. There was little space inside for the wolves to move, eat or drink. With the stress the wolves had been under, it meant the potential for death.

Finally, at seven o’clock that evening the Court of Appeals lifted its stay, allowing the wolves to be released from their kennels into the acclimation pens.

In hopes of the order being lifted that day, Wolf Project biologist Doug Smith had remained in the park. He waited for Wolf Project Leader Mike Phillips and others to join him. Together, they snowshoed to each pen to release the kenneled wolves. After the long confinement, most wolves hesitated to pass through the open door of their kennel door; however, 7F (Rosie) tentatively set her paw in the snow and then boldly stepped out of the kennel. Her paw prints left a mark on Yellowstone soil that was missing for so long.

With those first steps, our hearts were full — the wolf was returned!

For more reading and resources about the reintroduction,