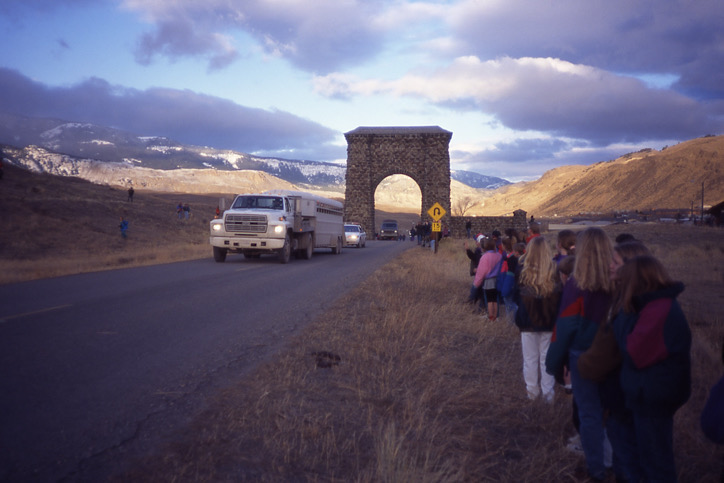 Celebrating the return of the wolf

For almost 70 years, the howl of the wolf was silenced across the hills, valleys, and forest of Yellowstone.

In the late 1800s and early 1900s, the policy of the U.S. federal government was to exterminate the wolf everywhere, even in national parks. After the last two known wolves were killed in Lamar Valley in 1926, wolves were extirpated from Yellowstone. A change in public attitude toward the conservation of imperiled species led to the passage of the Endangered Species Act in 1973. With the listing of the gray wolf species as endangered, the policy of the federal government became preventing extinction and promoting recovery.

Wolf advocates from all walks of life fought to restore the wolf to the ancestral lands in the American west where they once roamed. After 20 years of hard work toward that goal, in 1994, Congress and the Clinton administration approved the reintroduction of wolves to Yellowstone and central Idaho.

The wolves for the reintroduction will come from Canada. An area along the Canadian Rocky Mountains, east of Jasper National Park and near Hinton, Alberta is selected as the capture site because it is similar in terrain and prey to the release sites of Yellowstone and central Idaho. The U.S. Fish & Wildlife Service, Canadian government, wildlife biologists, and local residents work cooperatively in the restoration effort.

In December 1994, an operation team works to capture wolves and fit them with radio collars, then release them to rejoin their pack. In early January 1995, telemetry is used to locate the radio collared wolves with their family members. Capturing family units is especially important for the wolves going to Yellowstone. They will undergo a soft release — which means penning them together as groups for a period of acclimation before release into the park. Eight wolves that are captured during the operation are designated as Yellowstone bound and driven to the airport in Hinton, Alberta. After a preflight medical check, each wolf is placed in a specially designed steel shipping kennel for the long journey ahead. The eight wolves going to Yellowstone consist of a family of six wolves captured near Petite Lake, as well as a mother and daughter from the McLeod River area.

* In Calgary, Alberta, the wolves will go through Canadian customs.

* From Calgary, the aircraft will fly to Great Falls, Montana where the wolves will go through United States customs.

* The final leg will end in Missoula, Montana where a truck will be waiting to drive the wolves to Yellowstone.

While the wolves are airborne, the Farm Bureau files an emergency lawsuit in an effort to stop the wolf reintroduction from happening. Until the court makes a ruling, the wolves now en route to Yellowstone will be confined to their shipping kennels, and cannot be released once they reach their destination — not even into the empty acclimation pens.

The plane lands in Great Falls, Montana, but there are delays going through U.S. customs. By now, the pilots have already worked the maximum time allowed by the Federal Aviation Administration and the plane is grounded. The wolves must wait at the airport hangar until other transportation arrangements can be made.

Meanwhile, a caravan of trailers being escorted by rangers for additional security reaches Missoula, Montana. The caravan is expecting to pick up wolves, only to find out the wolves didn’t leave Great Falls as scheduled. So, the caravan continues to Great Falls in order to pick up the stranded wolves. At three o’clock in the morning, the caravan finally arrives and the eight shipping kennels are loaded onto a trailer that will drive them to Yellowstone.

CELEBRATING THE 28th ANNIVERSARY OF THE REINTRODUCTION OF WOLVES TO YELLOWSTONE

The wolves are unaware they are going to a wilderness in which their kind has been absent for almost seventy years, but the American people recognize the history being made. People excitedly line the street near the North Entrance in Gardiner, Montana to witness the return of the wolf to Yellowstone. As the trailer carrying the wolves passes by, children are cheering and waving American flags. Television crews and reporters are there to cover the story and share the moment with people across the world.

The eight wolves have traveled over 1,000 miles, and as the trailer passes under the Roosevelt Arch, these pioneers of gray wolf recovery have finally reached their Yellowstone destination. The gray wolf is home once again in America's first national park, and restored to its rightful place in nature!

For more reading and resources on the reintroduction, visit The 06 Legacy: Restoration